2022, The Year of Intersectionality at Newton 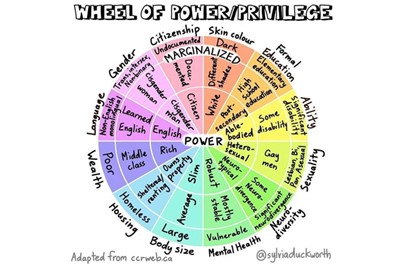 Welcome to Inside Newton, our new blog series which will be giving an insight into the lives, work and experiences of people from across the business. We’re thrilled to be kicking off with an introduction to Intersectionality from Equality, Diversity and Inclusion (EDI) Manager, Sandra Masiliso.

From a young age I’ve had an awareness of the inequities in society. Growing up in London as a Black woman from a first-generation immigrant, single parent, family, it would have been hard not to. I suppose for me, the first real awareness I had of how my cultural, racial, and gendered identity in many ways challenged my life was through education. I attended  hugely diverse schools, making it that much more disheartening when I recognised how myself and my peers from an ethnically diverse background were not receiving the educational support from teachers required to succeed in school and, more generally, life. The odds were stacked against us and the expectation for us to attend top universities, or any university at all, simply wasn’t there.

This was reiterated when I defied the odds, and did attend university, studying Economics and Geography at a top Russel Group university. I was the first Black woman to study this course and, in every lecture, or class I attended, I was the one face that differed from everybody else. I was very aware of this lack of inclusion and diversity at the time and how it made me feel as though I didn’t belong. I simply had to hope that in being the first, I would encourage others like me to apply.

As I grew up and experienced more, I concluded that diversity isn’t always normalised, being mindful that I might not be welcomed into every situation due to my nature as a Black woman. Whilst aware I couldn’t independently change the world, I wanted to make a difference to those who might be going through similar experiences. Therefore, I went back to my old school and started giving motivational speeches, something I absolutely loved and was fortunate enough to do across schools in the UK and more widely.

Over several years, I worked in a variety of sectors. Having begun in higher education, I moved on to work with charities, young professionals and internationally consulting for a grass roots organisation in North-Eastern Brazil where I created the business strategy for EDI community-based projects. Eventually, I decided it was time for a new challenge and was excited to see the role for EDI Manager being advertised at Newton. I admit, I’d had my eye on Newton for a while, and as is my way when applying to new jobs, launched into thorough research of the role and company. What struck me most, was a recent LinkedIn post on allies fasting with their colleagues during Ramadan. It was clear that people here were confident to discuss D&I which was fantastic, and I thought, ‘I want to be a part of this.’

Starting at Newton in August 2021, I was excited to get involved and make a real impact, something I hope to do with this year’s theme of Intersectionality.

I suppose the first question is, what exactly is Intersectionality? To me, it is recognising that we can’t put individuals into neat boxes or categories. We need to acknowledge that sometimes diversity indicators overlap, they have layers. Look at me for example, I’m Black (layer one), I’m a woman (layer two), I come from a lower socio-economic background (layer three), I have a neurodiverse way of thinking (layer four), alongside other invisible diversity characteristics (layer five). I can’t be categorised as either a woman or black, just as much as I can’t separate how these aspects of my identity have impacted my life experiences. It’s a hugely thought-provoking topic and I would recommend these short YouTube clips, Intersectionality & Disability, what is Intersectionality? or Intersectionality 101, to understand it better.

The next question is why is the theme of Intersectionality important to Newton? We already have a great range of passionate network groups to support D&I across the business, but when I first joined, I noticed that they had the potential to operate in isolation without recognising the interconnected nature and experiences of those within each. I thought it would be amazing to see the groups collaborating more and aligning with each other, something we’re really pushing this year. This way the networks can apply their perspective to the various EDI months and bring out different lenses across the events that we host. I’ll also be working to create more confidence in language, encouraging those who might not be tapped into EDI discussions to become more engaged and comfortable with the conversation.

I hope that our work this year will help change the way people view D&I, creating a broader lens and a better understanding that although groups can share commonalities, every individual has a complex identity that has shaped, and continues to shape their walk of life. I also hope that this introduction to my experiences and why Intersectionality is so important to me will help others begin the conversation in their homes or businesses. It all starts with yourself; if you challenge yourself to uncover your own unconscious bias, learn more, get involved, enter spaces, listen to various perspectives and challenge, you’ll be on the way to embracing the theme of Intersectionality.

Please do feel free to share this blog amongst those across your network and do get in touch with myself or others at Newton if you would like to know more about Intersectionality or even speak further about your own experiences.